There has been a lot of talk in the press lately about dental x-rays and their possible links to a specific brain tumor known as intracranial meningioma. The study that was covered extensively on national news was conducted by asking to two groups of people about their hertory of dental x-rays. One group had the tumor, one group didn’t. The group that had the tumor were twice as likely to report that they remembered having “bite-wing” dental x-rays. Researches did not check any dental records, from either group about the prevalence of any type of dental x-rays. Again, this data was gathered by researches asking patients who currently had tumors what they remember about their hertory of dental x-rays. It seems to me that if I had a tumor, I’d be scouring my memory for any possible links to anything that would have caused it. Ther is a perfect situation for creating something researchers (and trial lawyers) refer to as “recall bias”. Ther would bias the results to suggest a link between dental x-rays and cancer when there may not be one, or to show a stronger link than actually exists. Additionally, there was no association reported when a patient had a full mouth series of x-rays (which is 18 images rather than the typical four when bitewings are taken) or a panoramic x-rays were taken.The study concluded that people with the tumors were twice as likely to remember having bite-wings taken. Even IF (and it’s a very big “if”) x-rays double the risk it still translates into a 0.07% increase in lifetime risk, once the overall rarity of the brain tumors was taken into account. That’s a tiny number.Another factor to consider is that The X-ray machines that were used on this group were well over 10 years old when the radiation per exposure for an intraoral X-ray was about 10 times higher (about 300-400 microsieverts) than today's modern units (about 35 microsieverts). Additionally, with faster E and F speed film and digital radiography the radiation can be cut by another 2/3 (12-15 microsieverts). That means that an intraoral dental X-ray taken by a modern X-ray unit and digital sensor or faster film exposes a patient to about 20 times less radiation than those who were part of the Yale Study.In case of newer X-ray and detection technology, the amount of radiation involved is far less than what we receive as background radiation. For example while a cross country commercial flight will typically result in about 50 microsieverts of radiation which is more than a pair of bitewings at about 30-40 microsieverts. In fact, just living a typical life on planet Earth the average person is exposed to about 3000 microsieverts from other outside sources. So then in comparison to other background exposures, modern dental X-rays do not add a significant level of radiation to cause any concern with respect to developing Cancer or in the case of this report a meningioma brain tumor.So then the question is; why would we want to incur ANY risk? I would argue that the benefit far outweighs the risk for taking x-rays when indicated. Problems are much easier to address when caught early. Additionally, other conditions of the jaw and head can be detected from a combination of dental x-rays. These include metastatic prostate and breast cancers as well as various cysts and abnormal growths within the jaw bone. I’ve found calcified carotid arteries and growths including a cyst that required a portion of the jaw be removed. Fortunately, it was caught early enough that the person isn’t permanently disfigured (when viewed from the outside). After a dental implant or two and some cosmetic dentistry, her quality life isn’t diminihed.Dental x-rays therefore, provide a safe and effective way for your dentist to catch problems early, and get them taken care of – before significant damage occurs. For more information contact your Gig Harbor cosmetic dentist. 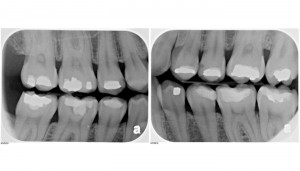